Healthspan’s Ruby Breakfast is the first effervescent Vitamin C to contain no sodium. Check other fizzy vitamin tablets and you’ll find they provide the same amounts of sodium as one-and-a-half to two packets of Ready Salted crisps. A table showing the salt-equivalents in popular brands is shown in the table at this link.

Current intakes of salt average 8.1g per day for adults, which exceeds the recommended maximum of 6g. If you have high blood pressure then you are advised to cut back to no more than 3g salt a day.

Excess sodium increases blood pressure, which is why official NHS advice is to avoid effervescent vitamin supplements or effervescent painkillers. These fizzy tablets normally contain significant amounts of sodium in order to make them dispersible.

How harmful are sodium-containing tablets?

A UK study, involving data from almost 1.3 million people, found that those using sodium-containing, effervescent or dispersible medicines, such as soluble aspirin or paracetamol, were seven times more likely to have high blood pressure than those using the equivalent, regular, non-effervescent versions. As a result, users of effervescent products had a 16% – 28% higher risk of experiencing a heart attack or stroke. This was attributed to their higher intake of sodium, and the researchers advised doctors that these sodium-containing formulations should be used with caution. Patients who are prescribed them should be closely monitored for the development of high blood pressure.

Even if you don’t have high blood pressure, research shows that it takes just half an hour for one salty meal to significantly impair arterial function, and to increase arterial stiffness. While the long-term effects of this are unknown, these studies show that salt can have potentially harmful effects even in people with a healthy blood pressure. 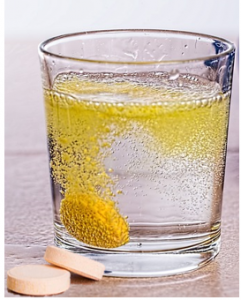 Until now, all effervescent vitamin tablets contained similar amounts of sodium to fizzy painkillers. Healthspan are the first to launch a patented alternative.

When a group of older people taking prescribed effervescent paracetamol (3g per day  for osteoarthritis pain) switched to standard tablets, their blood pressure reduced by an average of 13/2.5 mmHg within four weeks.

Do you take any effervescent, soluble or dispersible supplement or medicines? Were you aware that official advice is to avoid them – especially if you have high blood pressure? It doesn’t appear to be widely known – even among doctors!

Click here to find out more about the health benefits of vitamin C.

Click here to find out more about how salt raises high blood pressure.